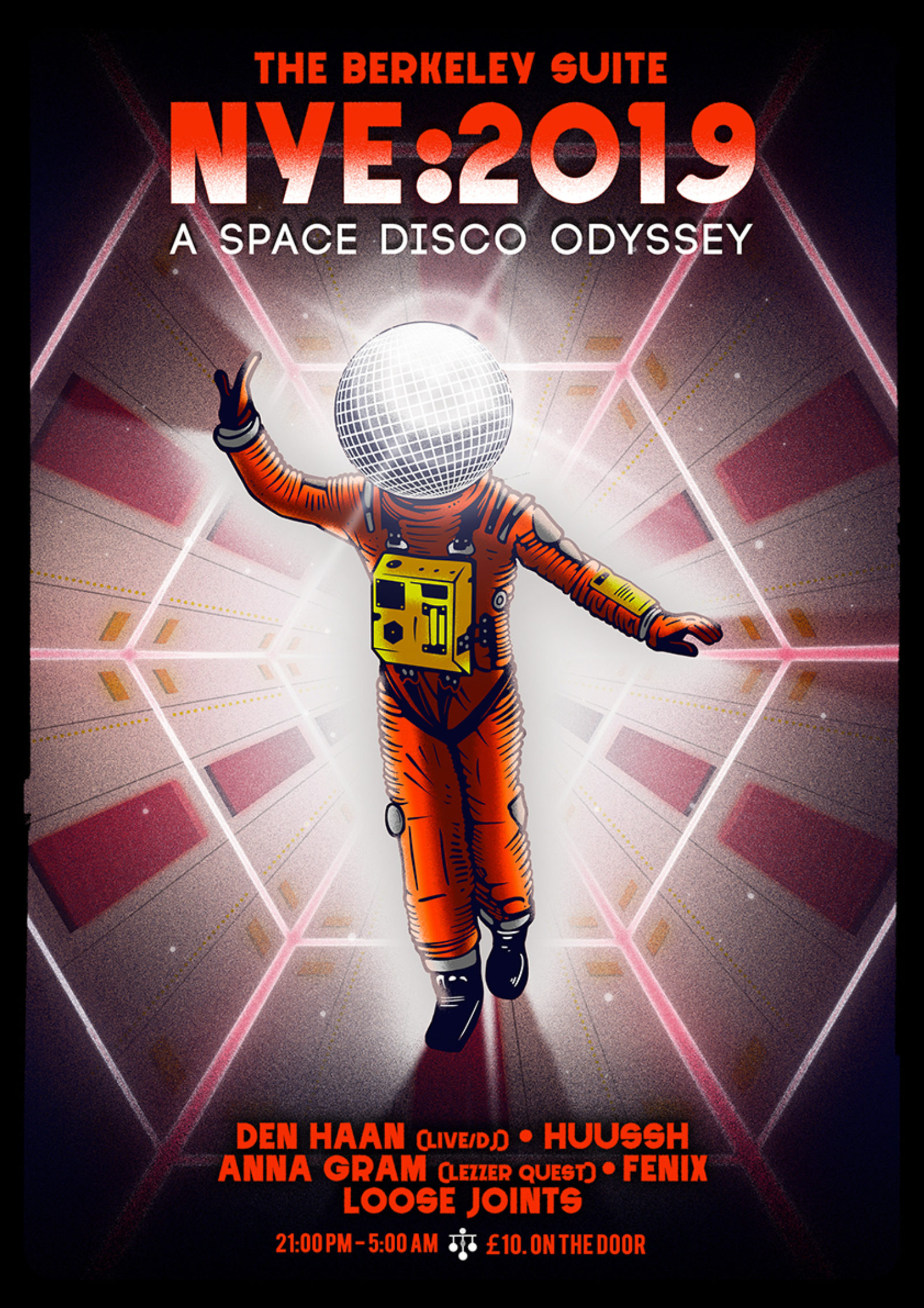 New Years Eve 2019 will see the fulfilment of a prophesy for which The Berkeley Suite has been preparing for many years.

At the appointed moment, a living appearance by beings known only as DEN HAAN - original and authentic Gods From Outer Space - will herald the arrival of a fleet of intergalactic space ships. These wondrous craft will congregate above the motorway at Charring Cross at very moment the year transitions from 2019-2020.

Those special few chosen people gathered at the Berkeley will be blessed by visitations from highly evolved inter-dimensional beings, granted ascendancy to new levels of their Higher Selves, before departing to new lives in the underground cities of M.A.R.R.S.

This is the mission and the prophesied day for which celestial DJs and sky-gazers have long waited.

LOOSE JOINTS - a holy trinity of Glasgow-bound taste makers and movers.
FENIX - a duo of passionate proponents of parties for planet people.
Anna Gram - one half of the sapphic space revolutionaries Lezzer Quest.
ΩHuussHΩ - A queer and mystical creature, long revered in the dimensions of sound.

All have been in spiritual training for many years, mastering the esoteric ways of Fourth Dimensional Dancing in sacred basements and those oft whispered of, secretive spaces across the city. Do not panic if they transform into ‘energy beings’ in the course of their sets….

Within The Berkeley Suite, as the chosen peoples of Glasgow gather to await the Arrival, this group of interstellar millennialists will together instigate a deeply rhythmic psychic group therapy - intensively incorporating eccentric harmonic frequencies, sweaty karma, disco-reincarnation and past-life party memories, channeling the mass consciousness to a feverish level of quasi-rapture.

Bells and chimes will be heard, strange nosies will fill the air, celestial lights will be seen high in the sky…..and the space being will appear! At this moment, Higher Mental Communications will begin and 2020 will ARRIVE.

And if you believe anything, believe that it WILL be MENTAL.

Dress Code :- “its the end of the world an all, but i still wanna look kinda HOT"

*** Entry will be paused briefly between 23.50 and 00.10 so our staff can also enjoy the bells with everyone, the cheap price reflects the early entry, if you are later than this you will be asked to make up the difference to a full price ticket.